Oh dear. Two of the times these sides have met in the Champions League the referees have had death threats. Neither referee officiates at the highest level anymore and one, Anders Frisk, retired when it got too heavy. Fair enough but a terrible shame to see a career ended like that. FIFA agreed and awarded Frisk the Presidential Award for 2005 (won in other years by people like Desmond Tutu, Sir Alex Ferguson and Pele, so not an empty gesture).

Tom Henning Ovrebo says he still gets death threats from Chelsea fans. It’s only football. Besides which, Chelsea fans, you wouldn’t have won in the final anyway. The 2008 final should have shown you that. Even when you were in with a chance with a lucky goal despite being dominated for more or less the whole game and having a penalty to win the match, you still lost. 2009 would have been no different (except that United would now have 4 European Cups to their name). 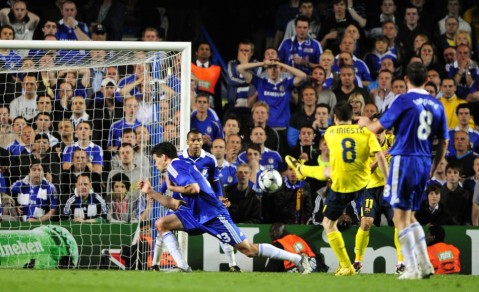 Chelsea were incredibly classless after the game. Despite Barcelona being down to 10 men after Abidal was sent off, Chelsea conceded a stoppage time goal from Iniesta (for my money, one of the best players I’ve ever seen in my lifetime). Ballack chased the referee asking for a penalty (ok, it probably was, and there should’ve been a couple of others, too) and Didier Drogba had a big sweary rant into the camera after the game was over.

When I was 14 I seriously considered doing a refereeing course. I can safely say that deciding against it was one of the best decisions I’ve ever made in my life. I can only imagine the relief when you finally get out of the sunday league and through the non leagues where you’re abused by players every week to join the football league – when the fans as well as the players are baying for your blood.

I’m not sure who’d reffing the forthcoming match but I think I’d be feigning illness on the morning of the game, myself!

Some Videos For You

To celebrate a Friday that’s come a day early (thanks, religion!), here are a couple of videos for your amusement: