There’s been a lot of complaining about the new high-speed ‘HS2’ rail link that’s been given the go-ahead this week. Yes, it’s very expensive and is unlikely to alleviate the overcrowding on the proposed lines but we’re now suffering for being the world’s first industrialised nation.

Sometimes you have a car that gets something wrong with it than it would be worth even after it’s fixed. We’re beginning to have the same problem with the transport infrastructure in this country.

Our railway network was built for these…

We marvel at what Japan, South Korea, U.A.E. and suchlike have done, but they’ve done it all at a much later stage than us. If we could start with a clean(er) sheet of paper, I’m sure we’d be able to do the same kind of things (especially as we’d probably get them to build it for us).

If we want a strong infrastructure in this country it may well be quicker, cheaper and easier to rip it all up and start again!

To widen a motorway, they need to close one lane of three and the hard shoulder for a couple of years, meaning that it’s reduced to a dual carriageway in a place that clearly needs more capacity, not less, otherwise why would they be widening there? Things weren’t built with future-proofing in mind (they still aren’t in a lot of cases) and some time down the line, you’ll suffer from it. 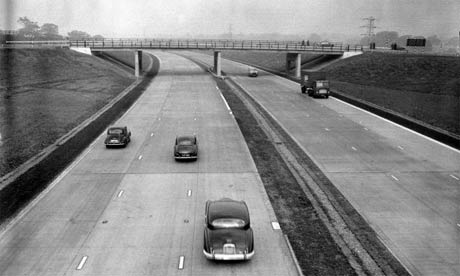 I didn’t have a car then, but I do now. Maybe I’m the problem.

It’s like the whole BT fibre optic thing. I remember Nynex (now Virgin Media) digging up all out pavements and roads to lay fibre optic cable down. Why can’t BT use that? I don’t have 6 electric cables coming into the house depending on whether I fancy using Eon, NPower, British Gas or whoever, so why have I got a dormant copper BT cable and Virgin Media fibre optic coming in? Is fibre optic cable fibre optic cable, or is there better fibre optic cable than others? BT seem to think that they’ll get higher speeds than Virgin currently do. Can they? Is that how it works? Is their cable thicker or what? (You may have seen, I don’t get this. If you can explain, please comment!).

Overall thought, it’s down to the fact that we were there first, did it well enough, privatised all that wasn’t already private to companies with their mind on profit (that’s what they’re there for, so fair enough) and now we’re struggling.